Title says it all and the jokes never get old. There were twins, they needed doing, we thus did! The fact that they were ogrons and generally not oo handsome has little to do with anything!

Screenshot to be added at a later stage, computer gone goofed.

Since the release of the expansion we have been hard at work and so little time was left for keeping the site up to date. Looking at what happened so far real quick, we have cleared the heroic mode of Highmaul and started mythic. 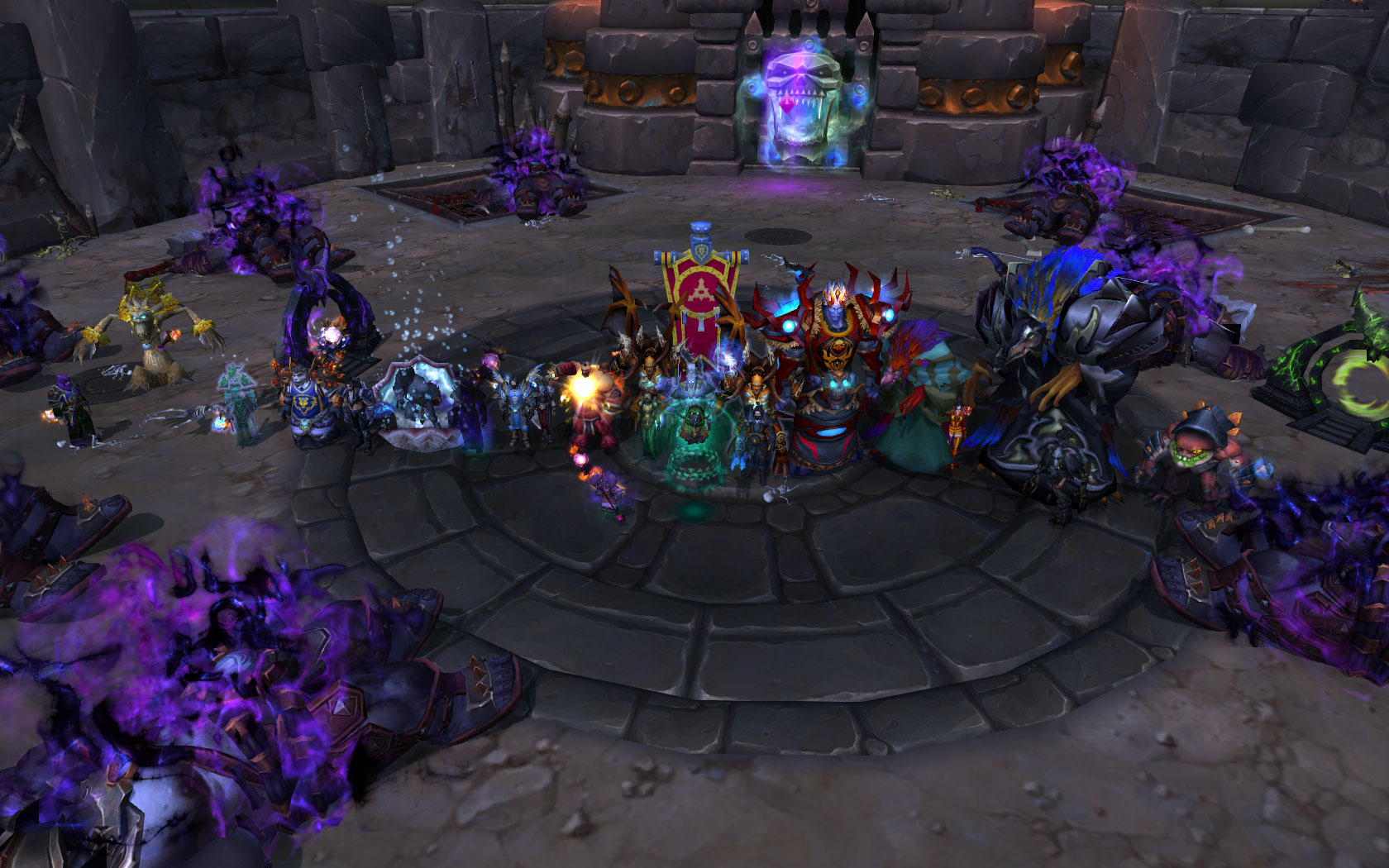 Next on the menu for us are Twin Ogrons – mostly so that we can, again, say we are doing twins with clear conscience. They’re not quite dead yet, but we’re seeing them enraged consistently, so it won’t take long from here on. Back with more news shortly.

After an extended summer-to-autumn break from official raids and with the patch preceeding Warlods of Draenor finally going live we have reactivated our raiding activity. Admitedly, the difficulty level of Siege of Ogrimmar surprised us, so ambitious plans to practice new mechanics and such had to be put on hold simply because things were dying too fast. At least every single member of the team got the Garrosh mount. 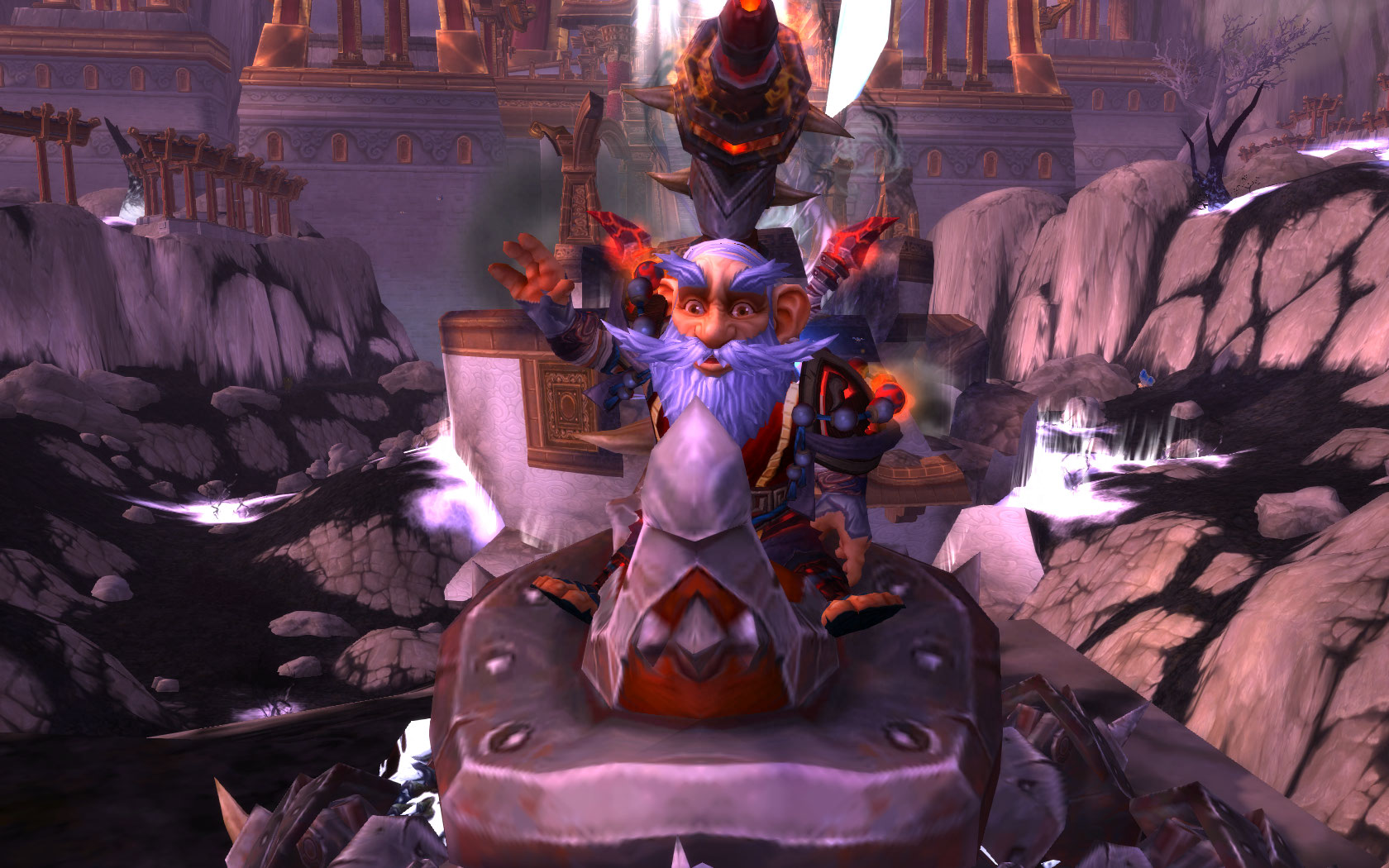 A picture is worth a thousand words and so the delightful gnome is relieved to wave SoO bye bye. Pandaria was a very enjoyable place to be, but we will all be happy to move on beyond the dark portal and to Draenor.

As far as more day-to-day business goes, recruitment is currently on hold, since the WoD roster is full. It is also only fair to add that the relationship with our sponsors is going great and so our member now gain some very material perks!

With the holidays season approaching and the content cleared and farmed for a good while, the guild is now officially on a raiding break. We will resume raiding activity once the pre WoD patch is released, to get used to the new mechanics before the actual release.

It was really impressive how stable the roster remained after Garrosh was killed and how helpful the people who got their mounts early on were towards the rest of the team. Very good stuff.

Enjoy the summer everyone.

We pulled Garrosh heroic. Then we pulled it 403 times more and he died. Well ok, rumour has it he didn’t really die, but he dropped dead nonetheless. 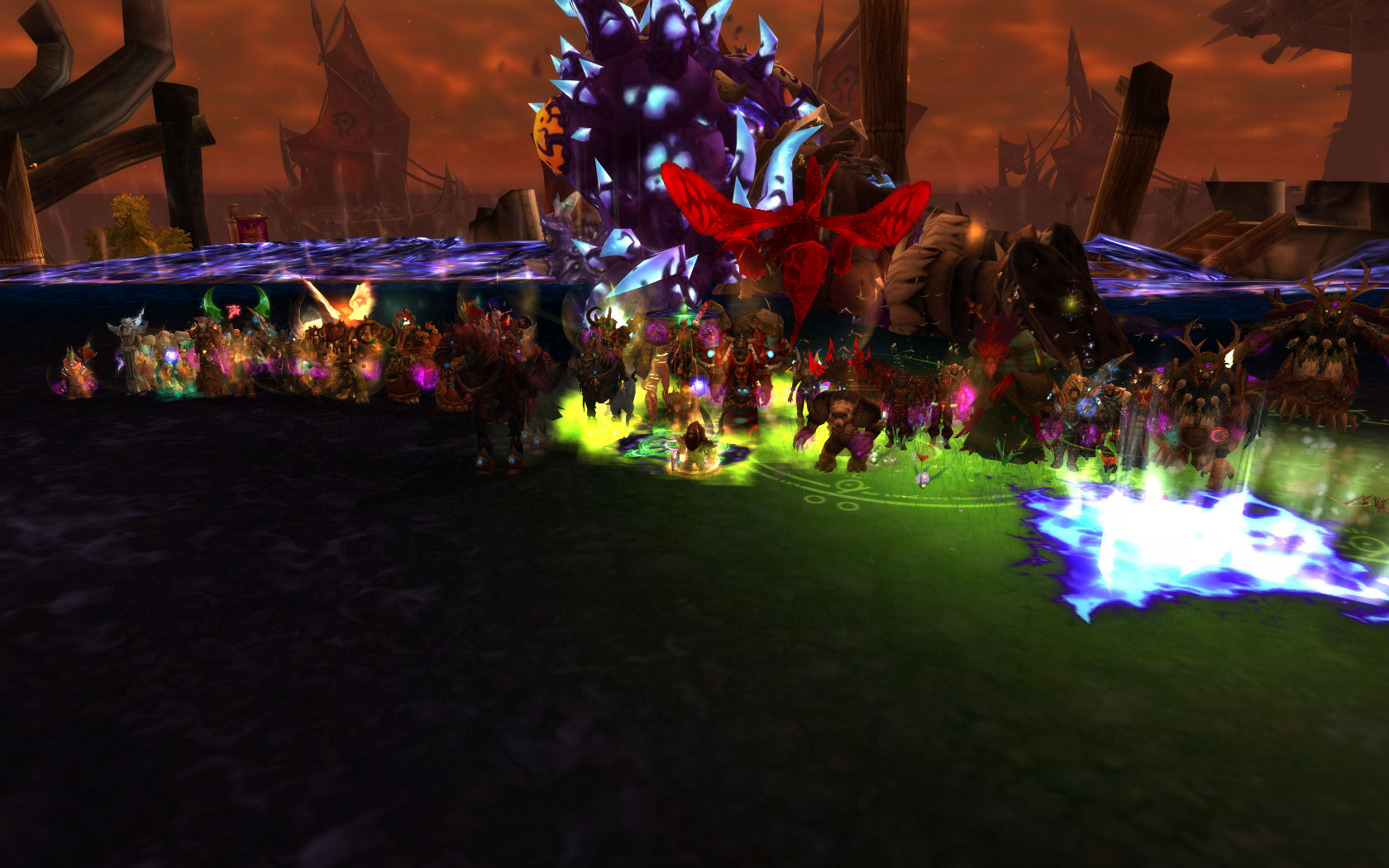 Elementios and Waratthh got the mounts, some others got heirlooms, Pandaria has been saved. All in all a good day. We ended this tier at position 409 as far as 25 man guilds go. Been considerably higher recently, but no surprise here, not with the mupltiple 10 man merges in preparation for WoD.

The prospects right now involve some laid back farming, more mounts, gearing up some new people and generally having a whole lot of fun without any pressure. Good times.

Good job everyone. Except for the monk kiter. He failed.

The Paragons of the Klaxxi are no more. At least for this reset.

205 wipes, so quite a bit. Most of the time a very enjoyable experience though. Not often  an encounter is that dynamic and surprising. Random even, in the good way, non-scripted. 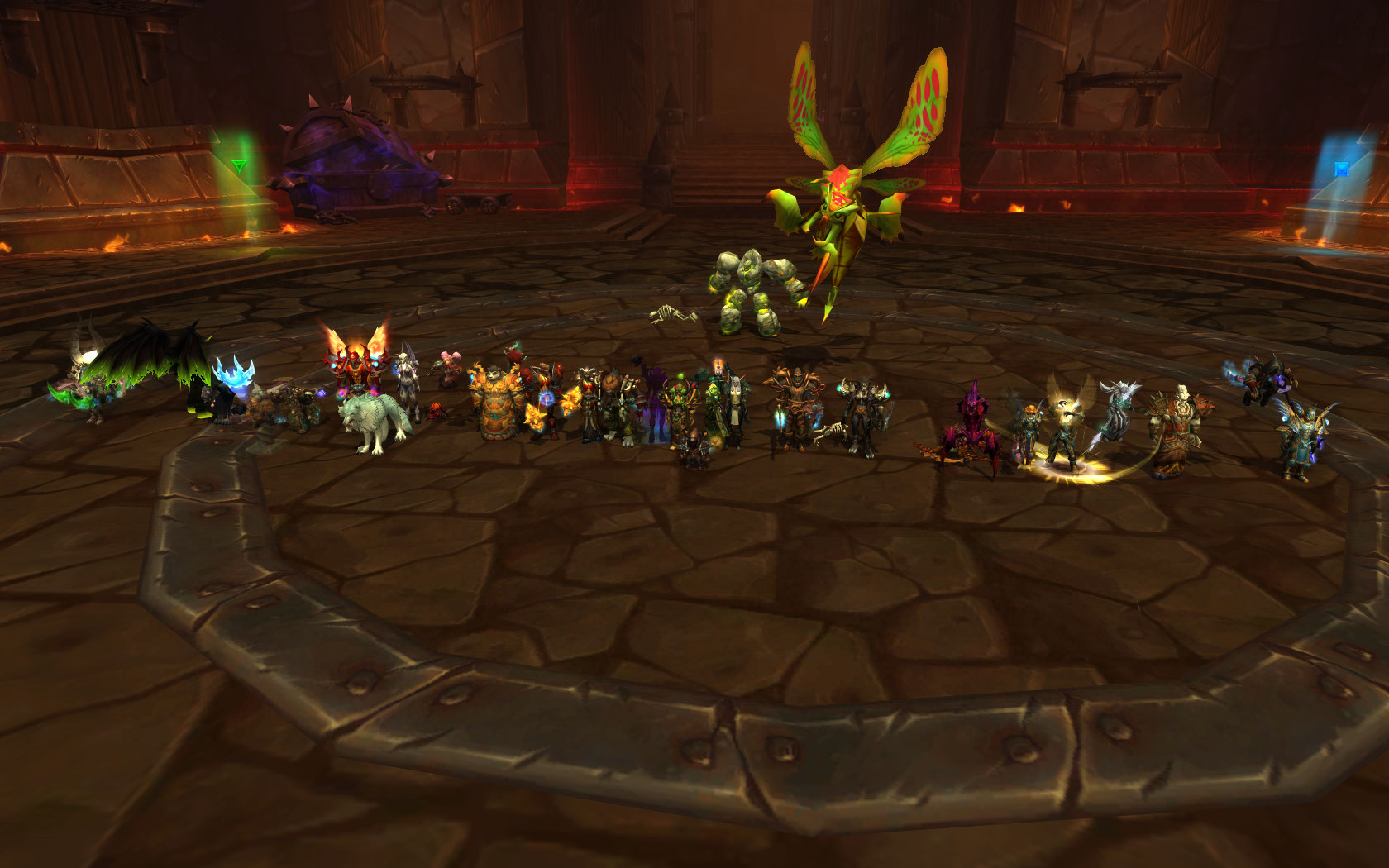 As it often is the case when fighting bugs (mhm), we did run into an inconvenient glitch or two, which at some point was getting mildly irritating. Regardless, we found a band-aid to that and moved on. Rumour has it we have not just one, but in fact 2 kill videos being made, presenting the fight from very different perspectives.

Next and final step is, obviously, Garrosh. That wil take some doing, but for once it doesn’t seem like we’re under immidiate time pressure. Now it’s just a matter of making sure the roster doesn’t shrink to the point where getting raids going becomes an issue. Other than that, we should have what it takes to stand a good chance of clearing SoO before the pre-WoD patch.

We have recently got in touch with people representing few brands from the gaming world. One thing led to another and in return we are now affiliated with the marks linked in the right hand side menu. This is for now all casual and informal, but there are some interesting perspectives, not excluding the option of a sponsorship.

At this first, initial stage, we cooperate informally, simply checking out how, if at all, we can help each other. For now, we will try to make the brands visible to the extent our presence in social medias allows for and return we get to be the cool guys, playing in a guild serious enough to have a sponsor.

So this kill require some more comment than the usual. Almost exactly 2 months since we killed the previous boss, Thok the Bloodthirsty. 320 wipes. That’s not an amount of attempts to be sneezed at, certainly the most spent on a single boss in the last 2 expansions (rumor has it Lich King might have sucked even more blood of us, but that didn’t end in a kill, so not quite the same). 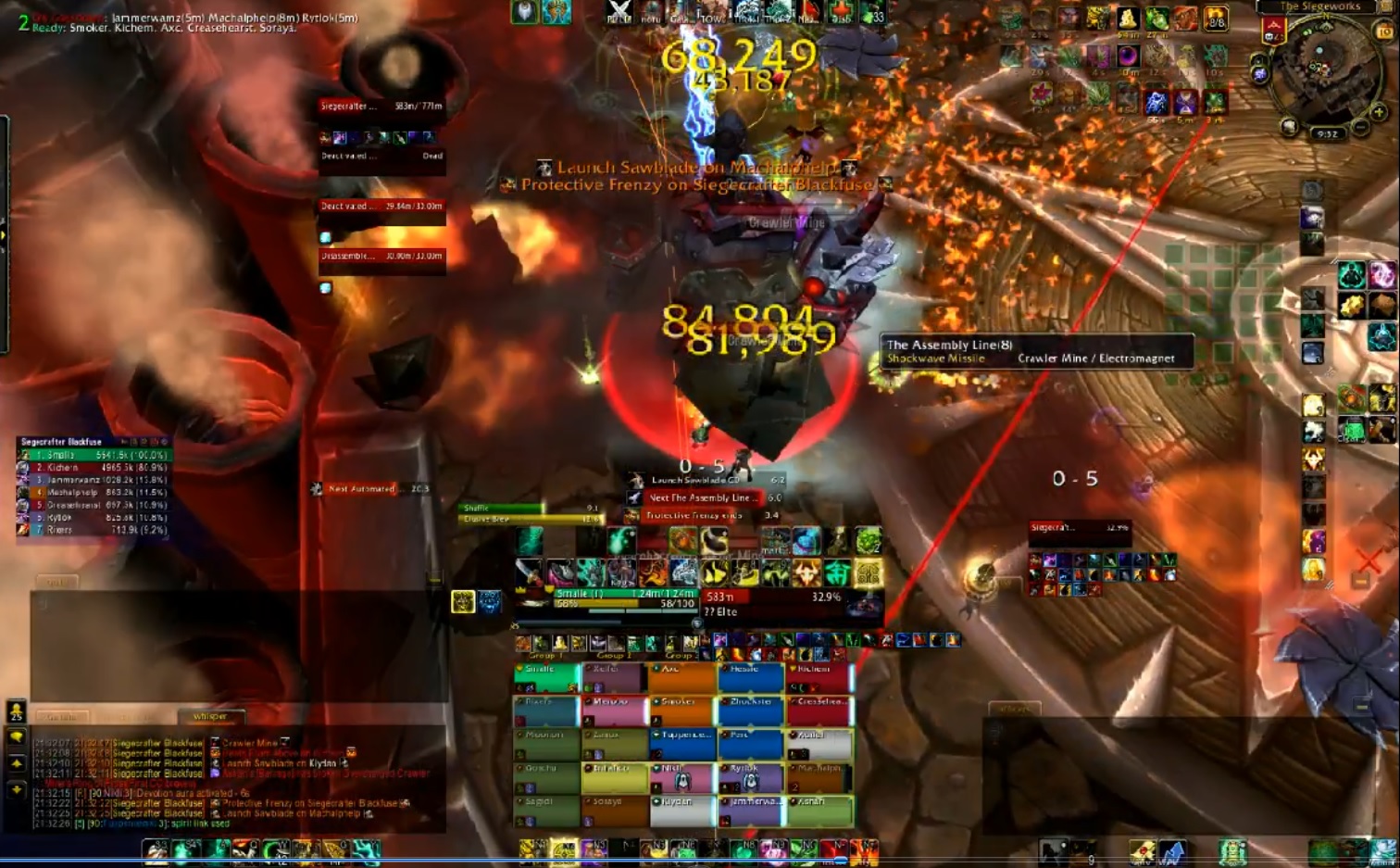 No doubt the boss is hard, no doubt there’s only so much good gear will help you with here. In our case, however, the greatest obstacle was the Christmas holidays, which somehow magically transformed into almost a month of no progression raiding. People had obligations, increased workload (yeah, let’s face it, by now it’s work rather than school for most of us), travels. Worse still, at the same time we’ve lost a few solid raiders who came to the conclusion they could afford and wanted to try out a 4 raids per week schedule. No hard feelings at all and all the more power to them, someone’s gotta keep Azeroth safe on the days we cannot attend to it! Still, it did result in some pretty tricky recruitment, where we needed rather geared players willing to join us while the raid size squish planned for WoD is on the horizon. With all this in mind, the first few dozens of pulls after Christmas break felt rather underwheling, since we had to give the new guys some time to learn the basics.

In the end we, as usual, did manage to overcome the difficulties, new people got the hang of it and things were falling back on tracks. Having had some wipes in the range of 10% by the end of the previous raid, spirits and expectations were high for Sunday. Even more so seeing as a nerf to the encounter was announced meanwhile, effective next reset!

We are all the more proud to present the following photo of a very dead goblin with a strong Mimiron-esque flavor. 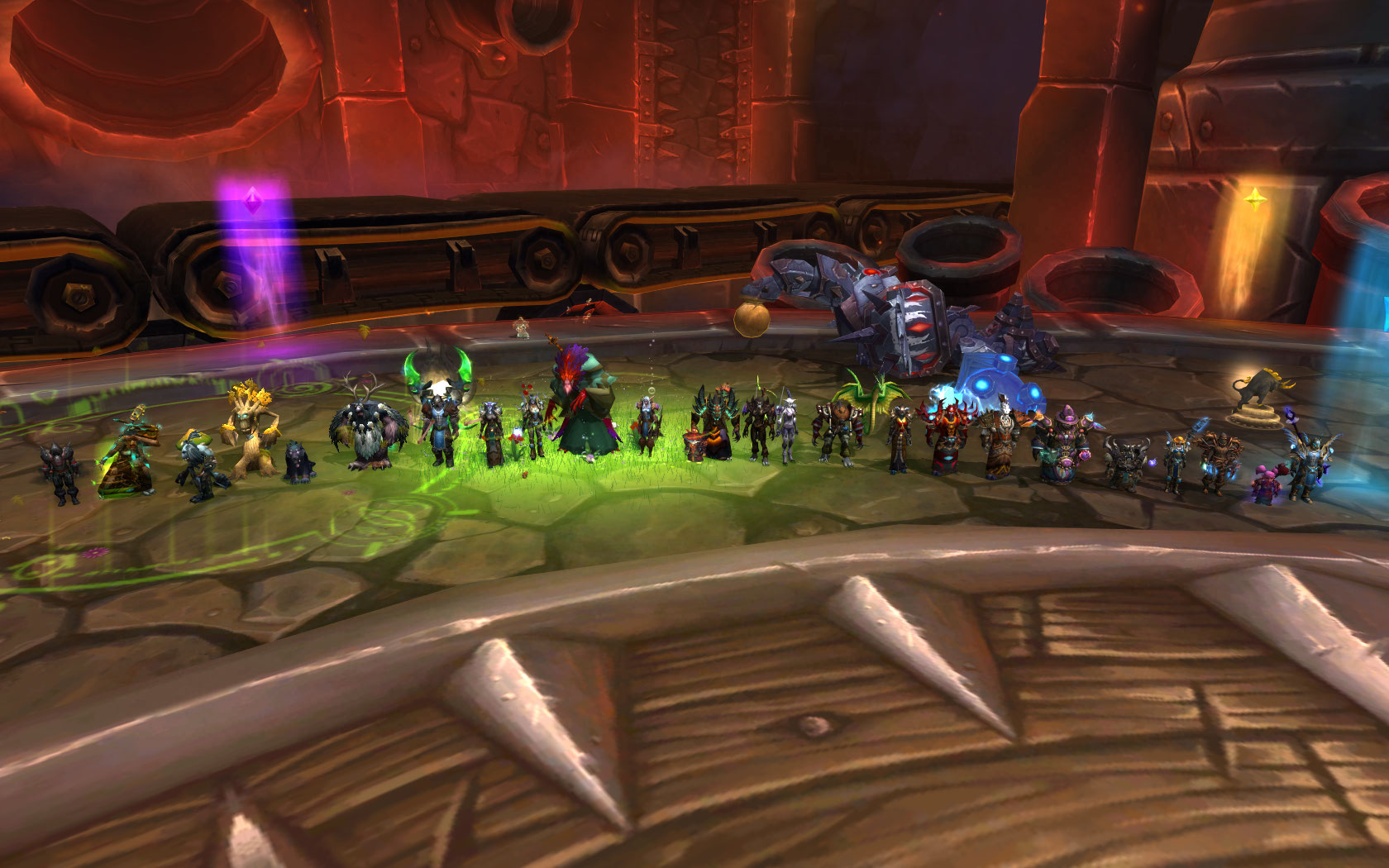 It would be very unfair not to emphasize one more thing. Huge thanks to the people who ended up on standby the evening the boss died. With all those wipes behind us, no one was keen on missing the kill. It really is a pleasure to hang out with mature people.