Fierce gnome on the poster tells the whole story here – 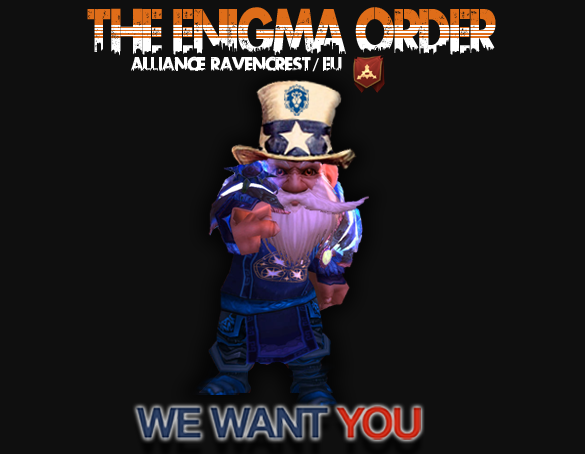 We feel we are in a pretty good shape and expect some high quality and good fun in upcomming raids. Our new policy results in more time spent working on new heroic kills, less on farming encounters we have already beaten. The roster is ok to that end, but we could accomodate few more strong dps. We therefore seek skilled, experienced, active and quite geared players to further strenghten it. The chart on the right hand side of the site has up to date information related to recruitment.

Give it a go and you might just find yourself side by side with the gnome sooner than you expect!

We do how ever have a few requirements listed below

It might be worth to state one more thing explicitly – we are less concerned with gear. We have had a few successful cases where a very poorly geared player convinced us with his application he was the material we were after, which ended up in a win-win situation. On the other hand we want the gear to at least show that a maximum effort was put in it.

If you are interested in joining The Enigma Order please visit our recruitment forum
http://enigmaorder.com/forum/viewforum.php?id=12

You can also visit to learn some more about our history which is quite vast
http://enigmaorder.com/forum/viewtopic. … 01&p=1

But it was on Tuesday the really cool thing happened, check this out

Starting out with trying our normal mode tactic on heroic with the adjustment that we sent some guys into twilight realm and it was like hitting a wall with the damage output when we got them to ~40%.
So after some look around a new tactic was found that made our rogues finally useful who would have thought?

After about one and a half week of practise with the new tactic they went down and we ended up with and I quote “the dictionary definition of bad loot”.
But some of the stuff went to use after all and we left our heroic kill happy as always with our eyes set for the heroic version of the two-headed “end boss” of BoT

Community
In other news, some funny facts we just managed to be ranked as the top 3 guild on the alliance side on Stormreaver, hurray hurray lets see how long it lasts 😉

A lot of stuff has begin jumping up about the 4.2 patch so about time to check it out so you know what the patch has in store for you except for the new “Ultimate DKP massacre” for casters this time.

Some new needs for our roster have surfaced and take a look if you are one of the people we might be looking for, you can check our current need in the menu bar to the right.

Here we go again this week had it all drama, progress good and bad wipes

Thursday was mostly a standby raid on Magmaw before we got the hang of it again. the worm died then we went on to kill Omnobots on normal then we paid visit to Chimaeron on heroic and that was it

Sunday was all about Atramedes practise we stumbled upon some nice stuff tactic wise and after experimenting around some we got him down to 10% before the raid end
Song of the day was “http://www.dailymotion.com/video/x132rv_bee-gees-stayin-alive_music”

Tuesday we went for Atramedes once again with resolve in our hearths, came of to a very slow start some “instant” wipes some bad stuff with breath and so on and moral was pretty low for a while and then last try before a longer break he went both blind, deaf and dead and while making silly faces at him we distributed some heroic loot

Sound the drums, the dragon is dead

We reached guild level 25 as well this week, thanks to an awesome alt raid that earned the last experience that was needed.
Now everyone and their mother has a lion and are resurrecting people like they are priests or something

Recruitment have opened up, maybe your the one we are in need of check the list in the menu to the right to find out. Feel free to apply still we are always on the look out for excellent players

Last thing our video guru Axc have a kill video incoming on Atramedes stay tuned for it!

We have been quite active seen the release of Cataclysm a lot of people levelled up quickly and the heroic farm begun.
With more and more people getting the gear needed we started to raid 10man almost as soon as there where 10 people with the gear and will (which was not a problem) to begin with, and quickly whopped up some bosses. Which has left us with basically only two bosses left on 10man mode

Some interesting encounters indeed and we managed to obtain quite a bit of understanding of most bosses for a lot of our players before the beginning of 25man raids which was ushered at the same time as the new year.
With most of the guys already knowing the encounters we yet again got some quick boss kills and we are now training for the somewhat more complicated fights.

Some of our most recent kills

Conclave of winds bites the dust.

Maloriak runs out of adds

We are now aiming towards the end bosses on normal mode and seems like we are in for a treat with yet again a bunch of interesting fights to deal with
The above leads on to the next point which is the need for expanding roster, we are always recruiting exceptional players so even if you are not the class we are interested in you might be the person

We do how ever have a few requirements listed below

It might be worth to state one more thing explicitly – we are less concerned with gear. We have had a few successful cases where a very poorly geared player convinced us with his application he was the material we were after, which ended up in a win-win situation. On the other hand we want the gear to at least show that a maximum effort was put in it.

Our immediate recruitment needs are reflected in the chart on the right hand column.
However let not this blind you as said above you might be a person we want anyway

If you are interested in joining The Enigma Order please visit our recruitment forum
http://enigmaorder.com/forum/viewforum.php?id=12

You can also visit to learn some more about our history which is quite vast
http://enigmaorder.com/forum/viewtopic. … 01&p=1

Peace out & see you in-game

As it is for now, we have a decent roster. Raids are cancelled only if some major event outside the game takes place. However, we have learned from experience, that holidays are the most tricky period when it comes to making raids happen. Since we stay up to date with our members summer plans and knowing that often some people aren’t comming back after holidays break, we have decided to try to reinforce our human resources a bit.

In light of the above, we are seeking for exceptional players. Class and spec is of a lesser importance, which of course doesn’t mean everyone will be offered a test period. An ideal candidate we are interested in is a person:

Our immidiate recruitment needs are reflected in the chart on the right hand column. However, as stated in the first sentence, at this stage we are considering next to every class and spec.

The Enigma Order has an active history for over 4 years with alot of dedicated and skilled players, both old and new. Some are still around since the day the guild was made. During these 4 years our goal has been to progress as far as the game has to offer and we have succeeded on it quite nicely. We are not calling ourselfs a hardcore guild since our way of raiding is not as strict as top end/hardcore guilds. If you are looking for a social, friendly and active PvE guild here is a good offer!

In Vanilla we started from Molten Core and managed to fight our way to the old god C’thun in AQ40 before the release of Naxxramas. Before BC we killed Razuvious, Anub’Rekhan and Faerlina in Naxxramas. BC was even more of a success for us than Vanilla was: we managed to clear all the content. Now in WotLK we have continued our success and have been lucky enough to find all the fragments for Alliance 2nd Val’Anyr with Mox being its happy owner.

Our progress in WotLK:

What we have to offer:

What do we expect:

What classes do we need:

Interested? Throw us an application on www.enigmaorder.com/forum or contact our officers ingame. Take some time for making the application, why would we want you? Posting a WWS from your raid improves your chanses aswell. If you need help with the application you might find Serrin’s post useful: http://forums.wow-europe.com/thread.html?topicId=3095769609&sid=1

Do you like a guild, that enjoys good progress, while still being casual?

Do you miss beeing a part of a great community?

Then perhaps The Enigma Order is a guild for you.

We are one of the oldest guilds on Stormreaver. We are very focused on having good raids with a lot of progress, together with a great community.

Atm, TEO is progressing throughout Sunwell, and we will continue to do so until the expansion.

We want to review our ranks at lvl 80, and be ready to start some serious raiding once we are well settled in Northrend. Therefor gear wont have that big of an impact on your application, but your dedication toward raiding will.

For more info about joining TEO, contact an Officer or Classleader in game, and create an application here on our forum.

We look forward to hearing from you.